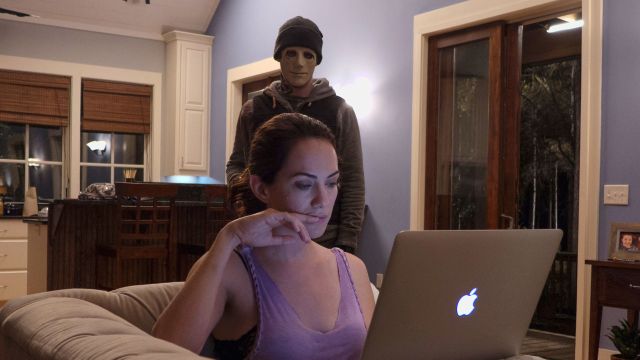 A few months ago I wrote an article on the top ten best feminist horrors, and though I stand by those choices, had I seen Hush before I wrote that article, it would have been in the top three. Hell it may have even managed the top spot.

Hush is the story of a deaf/mute writer finding solace in a secluded woodside getaway after the end of a relationship; only to find herself at the mercy of a sociopathic game-playing tormentor. It is a cat and mouse tale all the way with ‘who’s on top’ changing throughout the course of its less-than-90-minute run time.

With a miniscule cast of barely four, this film is an exercise in tension. Kate Siegel wrote and starred in this film as ‘Maddie’ the deaf/mute writer, and if this is anything to go by she will have a promising career in both acting and screenwriting. She is never anything less than believable.

As the tormentor, John Gallagher Jr. is menacing and unknowable without ever becoming a caricature – no mean feat when he wears a mask for at least the first third of the film.

The script is spare, with great use of the one location utilizing all aspects of this house and its surrounds. The direction is tight and maintains the tension throughout.

The main character is rational, wily and always real; an intelligent script knows its harder to dismiss the scares when the characters do what you would do. Its so much easier to buy into what’s happening when the cast aren’t empty pawns to be pushed into killing position, when the wounds they suffer aren’t just brushed off like a flesh wound, when they mourn for their fallen friends.

A horror with a smart script will get you every time.

But this film also reminded me of one of the things I love best about horror – women. Horror stands alone as the only genre presenting actual lead roles in film for women, the only genre that allows women to be anything, not just relegated to the girlfriend role; the only genre where it isn’t even an issue that she is a woman. Every other genre, with the odd exception, seems to make films, and then it makes ‘women’s films’. Horror consistently features nice juicy roles for women to sink their teeth into and they don’t necessarily have to be ‘sexy’ or desirable or harpies or whores. If they’re sexy its because they want to be, if they want to beat the bad guy they just have to be smart and brave.

This is why I love horror.

And Hush was great.

Btw. (spoiler) in case you were worried, the cat lives!