Bear with me folks because I’m going to say something controversial; although I recognise the original Halloween is an influential horror treasure, upon re-watching it within the last few years I found it far from the masterpiece I had remembered. In fact, it seemed to be almost littered with plot holes and inconsistencies as well as poor characterisations.

Michael Myers himself is of course a horror movie icon, and the music still so effectively creepy all these decades later, but I cannot in all honesty say it’s a film that has stood the test of time.

Now if that declaration has your horror toes curling in outrage perhaps it’s best to duck out of this review now, as it’s only gunna offend you more from this point onwards.
I approached the new Halloween with some trepidation; after all, as previously stated I no longer hold Halloween as a masterpiece and the many, many sequels were just diminishing returns on the fondly remembered original. But I must admit that Michael Myers has always held a certain degree of gravitas that Freddy Kruger and even Jason Voorhees can only dream of, having descended into almost comic iterations of themselves.

This latest version of Halloween chooses to ignore the sequels that followed the first John Carpenter release in 1978 and continue the story from where the original left off. It means there’s no ‘Laurie Strode is Michaels sister’ intrigue, just a random evil-doer stalking teens (and one in particular for no discernible reason) one fateful Halloween night. This does present a problem for me and was one of the many issues I had with the original which was never designed to be an ongoing series but a stand-alone film – why did Michael so single-mindedly and determinedly target Laurie? It seemed so deeply personal that I found it hard to accept it was random.

However, I have gone off track. In this, the next chapter we are forty years past the harrowing events of That Night. Laurie (Jamie Lee Curtis) is now a recluse, sharpening her skills for a confrontation her PTSD tormented mind is certain to come; though Michael has been institutionalized since his killing spree. Laurie is estranged from her daughter, Karen (Judy Greer) who, much like John Connor in T2, harbors resentment towards her mother for the ‘survivalist’ way she was raised; but Laurie enjoys a close relationship with her granddaughter, Allyson (Andi Matichak) who has nothing but sympathy for her troubled grandmother.

The fraught but always believable relationship between the three generations of women is definitely the films strength, without our investment here the events that befall them would hold no weight and it’s a testament to those involved that the fine strands of familial loyalty and combativeness are so well drawn.

Into Michaels sphere step hapless journalists Aaron (Jefferson Hall) and Dana (Rhian Rees) who wish to document a close encounter with the killer, and perhaps delve into the after-effects of that ill-fated night.

Of course, they know not what risks they take and what they help to unleash inside the long-dormant killer until its too late.

There is an escape and Halloween is once again a terrifying night for the innocent citizens of Haddonfield.

The inclusion of the documentarians is a great idea but I wish director David Gordon Green (Prince Avalanche) had done more with them, and also not given Aaron the ham-fisted melodramatic dialogue that recalled some of the more silly theatrics of Doctor Loomis (Donald Pleasance); indeed, any institution that uses terms such as ‘evil’ and ‘monster’ should probably excuse itself from psychiatric medicine altogether.

Aside from this faux pas, there is much to enjoy here, when the familiar strains of the theme music start, the nods to the old whilst adding density to the present, that white mask of malevolence that sends a shiver down your spine.

Some set pieces are very effective – the gas station bathroom scene is much creepier and nastier than expected, Michaels reign of violence so much more brutal than the PG horrors that have hit the multiplexes of late have led us to expect.

Once again, as per the original, the physicality of Michael Myers adds to his intimidating presence; he casts a long and violent shadow over Laurie’s life; and when you see him stride through homes and backyards reducing people to pulp in his wake, you can see why he has had such a hold over her – he is the Boogeyman indeed. 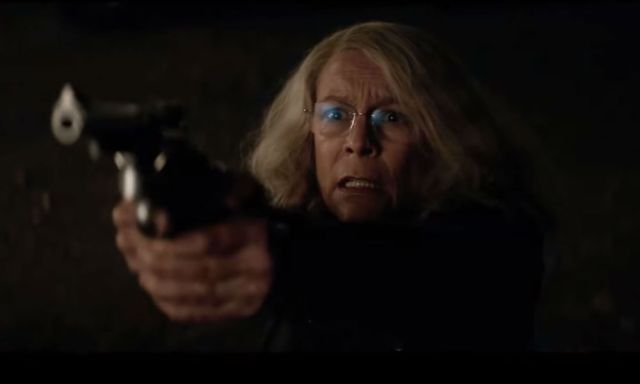 Reminding me of why my feminist heart loves horrors so much, this film (like Insidious: The Last Key with  75 year old Lyn Shaye front and center) features a 60 year old woman in the lead, and in fact has three lead women, passing the Bechdel test with flying colors.

Jamie herself gives a world-weary, edgy, thousand-yard stare performance that only someone as wonderfully skilled could deliver. She is the scarred heart of this film, by turns broken and battle-ready; it’s quite the commanding turn.

For me this film corrected all the issues I had with the original, and I personally would rather watch this again; as apart from the retro coolness and birth of an icon, what I see in the first Halloween more than anything is its failings.

Genuinely chilling with a satisfying ending, I liked this; just please no sequel!