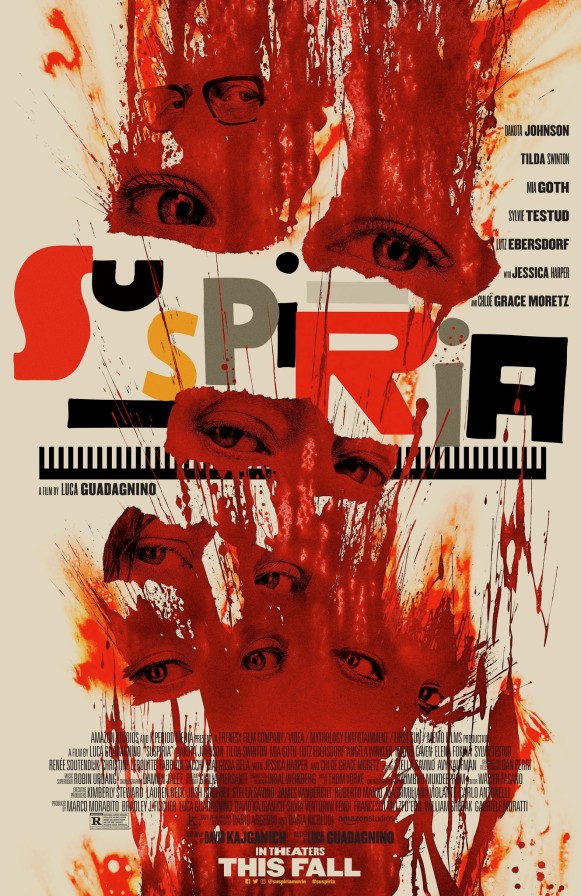 I wish I could have written this review directly after seeing the movie; but of course life gets in the way and time doesn’t allow it until days after the fact when all the feelings and thoughts have been gone through obsessively; all the words tumbling about in my mind struggling for the light, every response quietly catalogued and placed in their correct form. This will not be the meaty and meticulous reviews I wrote over and over in my fevered mind as I tried for sleep but instead was tormented by this deliciously dense film.

But I will do my best.

When a remake of Argento’s classic (and some say best) film Suspiria was announced, the horror world was up in arms of outrage.

Is nothing sacred? Why must ‘Hollywood’ digest these lightening-in-a-bottle films my community hold so dear only to spit out pale insipid versions of the stuff of so many nightmares and admirations?

“What’s wrong with just watching the original??” We all cry.

I, on the other hand, had seen Suspiria’s original incarnation quite late in my horror game and though aware of its pedigree and reverence (and general distrust of remakes) I was optimistic; after all this is not some James Wan hack job but a version by a truly gifted director in Call Me By Your Name’s Luca Guadagnino.

From the moment Susie Bannion (a powerful Dakota Johnson) arrives at The Markos School of Dance in Berlin things feel off kilter; an introduction featuring a barely recognizable Chloe Grace Moretz as the troubled Patricia and an even less recognizable Tilda Swinton as the tormented Dr. Josef Klemperer (in the first of the three roles she plays in this) tells us outright that we may be dealing with a witchy sort of academy; and through Patricia’s palpable terror and paranoia we learn that there is much to fear and perhaps no place is safe from their all-seeing gaze.

Susie is almost preternaturally skilled in dance, she aces her audition though the snobby madames judging her take great pains to point out her lack of references or training, and she is almost at once offered the lead by head dance teacher Madame Blanc (Swinton again, sublimely authoritive, sensual and vulnerable all at once). The previous lead, poor troubled Patricia has gone missing under mysterious circumstances that the women running the academy ascribe to her radical political leanings. You see the film is set in the 70s and Berlin is in turmoil with protests and historical hostage takings happening on the periphery of almost every scene, blasted from the small black and white TVs populating dorm rooms, whispered about by students. This tying of the real to the fantastical works well to ground the film in our world, to make immediate that which could feel fanciful.

Of course there is a big performance to prepare for and some other coven-desired act they are preparing Susie for too, though she doesn’t know that yet. Dr. Josef cant leave well enough alone, and friend Sara (Mia Goth – exquisite) is not swallowing the ‘Patricia is off making bombs’ story. Things are heading inexorably to a showdown, and what a gore-splattered showdown it is.

The direction has a dreamy quality to it in all the ways that that can be expressed – sometimes graphic and shocking, sometimes hazy and lovely, it strongly reminded me of Polanski’s work, with Rosemary’s Baby in particular coming to mind. The music by Radiohead’s Thom Yorke drapes itself about the film like a comfy cardigan that wants to ease you into what you’re seeing with assurances that all is ok, even when it isn’t – it sets quite the transcendent tone.

The acting across the board by an all female cast is nothing short of wonderful, all are believable, all give nakedly honest performances which throw off self-consciousness with abandon.

And this is the root of what I liked best – this felt an inherently female story. Not the delicate, feminine type of ‘female’ that we have grown accustomed to on film, but real ‘female-ness’; all the rawness of it, the terror of vulnerability, the forced familiarity with blood and flesh and our bodies’ complexities, the connections amongst us, the animal physicality, the horror, sensuality and unabashed fucking beauty of being a woman. I can’t say that’s something I’ve felt in a film before, and if I have, I can’t recall it.

I felt this film in my guts and sinew, in my sex and my power, in my nightmares and my smallness and my sweat.

It worked for me. It worked on many levels.

And I’m watching those witches weave their spells and change the world.