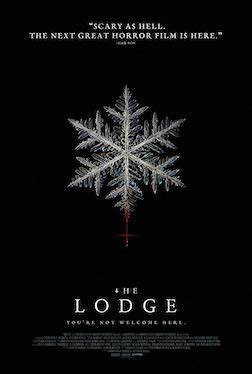 I am a huge fan of Jaeden Martell. Having been massively impressed with his work in the It movies and his earlier work in The Book of Henry (in which he is astounding!) I was eagerly awaiting his latest films. I saw Knives Out and though I didn’t care for the movie, the underuse of Jaeden (amongst others) was something that impacted my enjoyment of it.

When I heard about The Lodge in which he would be playing a major part (alongside the always great and underappreciated Riley Keough) I was more than a little excited, but when I watched the creepy, nerve-jangling trailer I was truly sold.

It has been a LONG wait.

Luckily, it was worth it.

The storyline will be hard to discuss as it gives it treasures up grudgingly and in small increments throughout the movie, but I’ll do my best.

After a family disruption, two children, their father and soon-to-be-stepmother decide to have a Christmas getaway to the snow. They hole up in their remote mountain lodge, enjoying ice skating and Christmas preparation until unforeseen circumstances call the father away for a few days. When a blizzard cuts them off from civilization, things get a little ‘chilly’. You see, step-mom Grace has a troubled escape-from-a-cult past, and the isolation and religious iconography is bringing it all back to her. The loneliness is bringing her paranoia and anxiety to the fore, and there are children in her care…

This summary only touches on some of the themes that make this film a standout. There’s trust violations, the unknowable-ness of those we share our time with, the awkward feeling of wanting others to like you, the tenuousness of our sanity in the face of fear, and feeling helpless.

Jaeden Martell was great as expected, Alicia Silverstone was a pleasure to see in a thankless role, Richard Armitage believably casual and unobservant, Lia McHugh as little sister Mia was surprisingly effective in her first big screen outing, but Riley Keough was an absolute revelation her committed performance, her tragic descent all the more moving because of her earlier work to show Grace as a timid but open-hearted victim of circumstance.

As directed by Severin Fiala and Veronika Franz this will recall Hereditary for many viewers in its aesthetics as well as its black heart – this doesn’t want to just scare you, this film wants to scar you. The choices made in the direction just elevate the material to a new level of artistic beauty. Some shots could be framed on the wall they are that lovely and terrible in equal measure. The relentless throb of the soundtrack adds to the extreme unease of the audience.

Disturbing and unpredictable, I saw this film with two good friends; we didn’t chit chat during it, and when it was over we didn’t talk much, we went home pale faced and silent, later messaging each other to say how we couldn’t shake it and had been thinking about it for days afterwards. Films like this aren’t common, films that get under your skin and fester there. I can’t say I enjoyed this movie, it wasn’t a movie to be enjoyed and it was likely the most depressing horror I’ve ever seen, but it stayed with me for a long time; and I’ll take that over disposable easily digested movies any day.