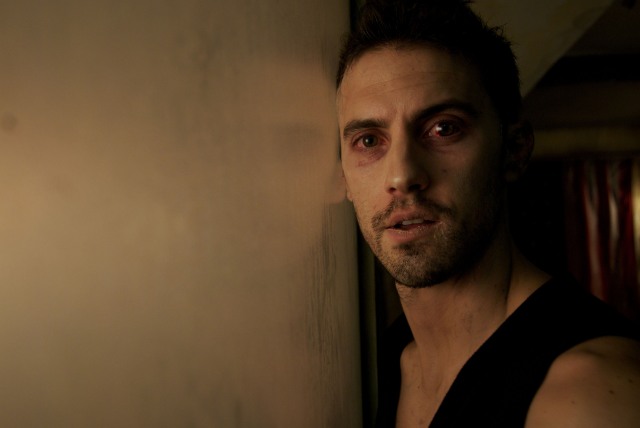 In 2007 Xavier Gens made a horror movie called ‘Frontiers’, it was one of the new wave of French nasties and once seen it was not easily forgotten with it’s graphic violence and depressing outlook on humanity.

‘The Divide’ is the film-makers second attempt at an english language film (after the failed ‘Hitman’ in late 2007) and he has again returned to the familiar ground of horror and darkness.

This is the story of a disparate group of survivors, escaping the nuclear war being waged outside their apartment block by hiding in said apartment block’s basement. How long they are there, what they do to survive, what is happening within them etc. is the main thrust of this compelling but utterly bleak film.

It is mostly cast with actors who have had their time in the sun and are now no longer the draw cards they once were or might have been; however there are some fine turns here, notably from Michael Biehn (Terminator, Aliens) as the curmudgeonly old janitor whose basement these interlopers invade, and Rosanna Arquette (Desperately Seeking Susan, Pulp Fiction) as a woman who finds herself spiralling towards a shocking degeneration after personal tragedy destroys her sense of self. The performances of both Milo Ventimiglia (Heroes) and Micheal Ekland are astoundly good and almost worth watching the whole film for, they are truly disturbing in their representation of men who fully embrace their changing circumstance, their opportunistic profiteering and alpha male behaviours are seriously scary stuff.

There are a lot of faults here, mainly the lack of early characterisation, the time frame is muddy, the confusion over the ‘white suit guys’, and it’s unrelentingly sombre and dread-filled tone can sometimes make it hard for the viewer to persevere.

But there is much to admire here, and it reminded me in some part of ‘The Mist’ with it’s dehumantization and return to savagery an almost inevitable conclusion to locking a group of people in a small place with dwindling supplies and no ‘society’ to keep us ‘polite’, (though of course, ‘The Mist’ was much much better).

I wouldn’t say i ‘enjoyed’ this, it’s hard to enjoy something so downright misanthropic and desolate, but i did admire what it was trying to say and a horror with something to say can only be a good thing in my book.