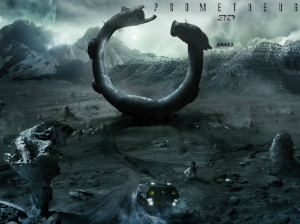 Prometheus is a film with a lot of baggage.
You hear that Ridley Scott is making a prequel to the phenomenally successful and critically acclaimed ‘Alien’ and you have some serious expectations. You expect (of course) a strong female lead, you expect the appearance of aliens/a certain character of alien/a certain look, you expect androids and paranoia and white-walled spaceships where anything can happen; you expect, in short, an intelligent thrill ride. Does Prometheus live up to these expectations? The short answer is no……but it really tries.
Of course it helps to have the uniquely brilliant HR Giger to design all things alien, and it also helps to have the accomplished and much admired Ridley Scott on board to direct. The problem here is the script; and what a problem it is.
The basic premise is that a group of scientists follow a theory that we were created by ‘engineers’ on a distant planet, the spaceship ‘Prometheus’ voyages to said planet where discoveries both huge and grim are made. The premise is not the problem, it’s how it is executed that has so many issues. There are nonsensical actions (using a flame thrower on a fellow crew member when there are guns available, a main character who is desperate to have children so quick to have a termination with barely a shred of proof that she harbours an alien, a crew member reported as dead welcomed back with open doors when he is clearly hunched and ‘wrong’), there are characters that are nothing more than ciphers – just a collection of behaviours and traits, not fully fleshed out people you could care about or root for.

The story is not coherent within its own universe; there are too many questions and not enough answers, too many story strands and not a clear consistent vision; and the film alternates between insultingly excessive exposition and almost deliberate vagueness which is exceptionally exasperating. There is a distinct lack of humour and humanity, which is surprising given the subject matter. Overall the script comes off as frustratingly obtuse and inaccessible.

There is some appalling acting from (in particular) Kate Dickie who plays ‘Ford’, a character you barely get to know and may only remember for her accent; and though Noomi Rapace registers well with her athletic and passionate performance, she struggles with the emotional side and fails to really connect with her audience. Guy Pearce is an odd choice as an old man in what is clearly layers of prosthetic make up, Charlize Theron is given her usual ice princess role but Idris Elba comes up well in the thankless Captain role. Having said that, Micheal Fassbender is wonderful in this film, seductively sinister but also hugely enjoyable as the android who emulates Lawrence of Arabia’s Peter O’Toole, for an android he is the most ‘human’ character here. 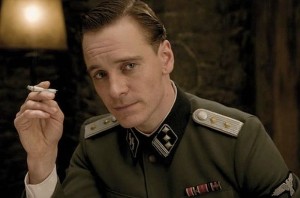 And what of the effects? Beautifully realised ‘engineers’, cool phallic worms in the water, giant explosive tentacle aliens, and one human-sized stomach burster to end the whole affair, there is little cohesion amongst these beasts of course but the real joy is in the execution. I saw this film twice, once in 2D and once in 3D, and I have to say that glorious night skies aside, the 3D added little benefit to the proceedings. 3D, after all, is no substitute for a poor script; one in which the principle character is driven by her quest to find out why, once they had created us, the engineers turned against us. “What did we do wrong?” questions Elizabeth Shaw, and this is when I almost spat my popcorn across the theatre. Look at the world we live in, the damage we have done to the planet, to the creatures we share it with, to each other. How can anyone ever wonder why a superior being would want to destroy us, and a film that would ask this question, is a naïve one indeed.